Travelling along the coast from Amalfi, with the music from the Italian job running through my head we went past Paestum and its temples down to Cilento which brings a remarkable contrast in many ways.

We hadn’t factored into our journey the fact it was a bank holiday weekend in Italy and therefore a planned two hour, 120km journey took a frustrating four hours. But we were on holiday so it didn’t matter.  We used the maps on  our mobile phones to get the best routes and on arrival discovered that the hire car had satnav! They didn’t tell me that bit.

The further you go south in Italy the more the tourists thin out (numerically!) especially after a bank holiday.  The food and wine gets cheaper too so that’s a bonus.

In 1991 The Cilento area was instituted a National Park to protect it from building speculation and thereby limit tourism which is quite ironic because in 1998 it became a Unesco World Heritage site thereby opening itself up to visitors!  Thankfully it is still beautiful and sleepy most of the time.

Inland Cilento is blessed with hillside  villages such as Perdifumo with stunning views over the gulf of Salerno and up to the Amalfi coast. If it’s peace and tranquillity you seek along with country walks, street bars, pastry shops(Pasticceria) then this is the perfect base.

Whilst searching for a suitable villa to fit all the family I chanced across  the ‘Summer in Italy’ website offering a good choice of properties. It’s always a worry trying something new and paying an up front deposit, but we couldn’t have chosen a better villa  or company to deal with. Nothing was too much trouble and our experience will lead to further visits. The villa was immaculate, well positioned and Margot came in every day to clean the pool, sweep around, change the towels and generally care for us with little fuss. Even the outside pizza oven was cleaned ready for our next home-made pizza making event which was a resounding success.

The hillside town of  Castellabate and it’s lower coastal town of Santa Maria di Castellabate boast stunning views and a bustling Italian lifestyle. Coffee in  Bistro Belleville in Santa Maria was always full of surprises.  When did you last order a coffee in a cafe and they brought you a complimentary selection of cakes?  You’re fortunate to get sugar!  One evening on our way out for a meal we called in for a quick drink as we watched the sun dipping into the sea. The drinks arrived with a small selection of sandwiches and crisps. “We didn’t order these” I explained. “On the house. Enjoy” was the answer.  Strangely we had another drink! What a great way to start the night.

The restaurant at the Hotel la Pergola on the main shopping street was typical of the area. Nothing was too much trouble,  they would cook anything. Their attitude basically was “who needs a menu” and asked all the children individually  “what would you like.” Then went and cooked it. I never saw so many clean plates. The food was inexpensive so we made up for it with good wine!

The run to Perdifumo.  Climbing up the hill out of Santa Marie di Castellabate towards Perdifumo on a road that was falling away in places was an experience in itself. The road in many places was littered with potholes and falling away at the sides. In England it would have traffic lights everywhere or at least black and yellow tape., but not here as we are expected to be the driver we were trained to be; spot the hazards and avoid them.

We eventually reached a plateau from which we felt as though we would see the east coast of Italy from it as we ran across the ridge.  The only bar in town serves delicious coffee and the local shop sells everything a village shop should, from fine wine to brushes and shovels. Why go elsewhere?

Walking through Perdifumo felt as though we were in a spaghetti western. It was so peaceful and yet you knew life was going on as usual behind closed doors. The occasional drift of conversation and music emanating from open shutters was quite reassuring. We enjoyed our coffee on the street and watched absolutely nothing happen! The trip down afforded us astounding views of the coastline below and was made more interesting by lorries and buses fighting their way up, commanding two thirds of the road especially on falling away hairpin bends.

Down at the more bustling harbour in San Marco we enjoyed a coffee whilst reading it’s history. Originally the location of the ancient Roman town of Erculia it was, in 1168, identified as the farmhouse of Sancti Marci, part of the baronage of ‘Castello dell’Abate’. It has now spread inland as expected,  behind the present port due to the growth in tourists.

Perched on the hillside, approximately two kilometers away  is the former Saracens base of Castellabate (the castle of the Abbot). The drive up brings outstanding views of the surrounding country, especially when you reach the top and look out to sea. The Bell Tower, with its shrill and far reaching ring announcing  the time, makes an imposing hillside spectacle. A few stalls sell their local produce, and as a much visited place they charge a little more for food here. Clinging to the hillside, as always  is Ristorante Cantina Belvedere. My initial response on our visit was that  ‘the staff aren’t too friendly’ and I sat there agitated by their attitude. When our order was taken however there was a marked difference with a new member of staff in charge. I went along afterwards to her and said “your presence here makes an amazing difference because I was ready to leave”.  She smiled and said “That’s because I’m the owners wife”. Straight to the top eh!  I had a super chat to her about the restaurant and village and she thanked me for being honest and letting her know that the staff were letting the side down. I would go back now.

The village is a labyrinth of small dark passages that open out to small squares, at each stage passing shops, bars, restaurants and houses with open doors giving fascinating glimpses of Italian village life.

Our next stop will be Paestum but I’ll explain that next month.       GP 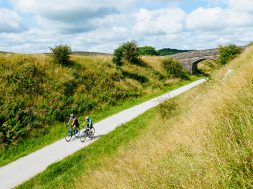 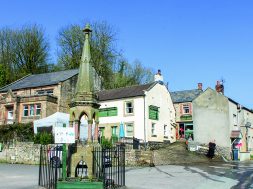 From Hen Racing to a Bygone Industry What do you know about Bonsall? 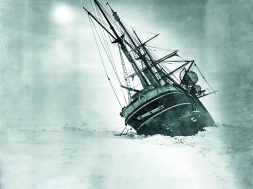