My daughter, although now 22, has gone through many enthusiasms in her short life: Barbie Dolls, Beanie Babies, My Little Pony and so on through Pokémon to soberer items. One of which was modern glass paperweights, of which we now have a considerable collection. On the whole, prices – mainly at fleamarkets and antique fairs – ranged from 50p to £25, certainly no more. Nevertheless, those made by established firms and artists, like Caithness Glass, Whitefriars, Perthshire, Selkirk (Scotland seems to specialise in this industry) and Langham (Norfolk) tend to start at our top price and can ascend (new) towards £200. Note that sometimes, you will never know the maker without the original box; this means that inexpensive anonymous ones are often by well-known makers but have been separated from their original boxes.

Those prices, however, can come down sharply at auction. At Bamfords we usually sell unsigned or unprovenanced ones – grouped in any convenient box; if there’s a really desirable one amongst them that we have missed (a rare event!) the buyer will be delighted. A group of miscellaneous anonymous 20th century paperweights is usually estimated at £20-£30 or so.

Historically, paperweights were made in the classic years between 1845 and 1860 primarily in French factories like Baccarat, St. Louis, and Clichy. Together, they made between 15,000 and 25,000 weights in this period. Bohemian paperweights were particularly popular in Victorian times. Large engraved or cut hollow spheres of ruby glass were a common form.  Weights (mainly of lesser quality) were also made in the USA, Great Britain and elsewhere, but the fashion for them declined from the 1860s until revived in the aftermath of WW2.

Indeed, in Scotland, still pre-eminent for paperweights in the UK, the pioneering work of Paul Ysart from the 1930s onward preceded a new generation of artists. A further impetus to reviving interest in paperweights was the publication of Evangeline Bergström’s book, Old Glass Paperweights. Starting in the late 1960s and early ’70s, artists began breaking new ground and were able to produce fine paperweights rivalling anything produced in the classic period.

The classic type of paperweight is the millefiori (Italian for a thousand flowers) ones which contain thin cross-sections of cylindrical composite canes made from grouped coloured glass rods and usually resemble little flowers, although they can be designed after anything, even letters and dates.

Lampwork paperweights have objects such as flowers, fruit, butterflies or animals constructed by shaping and working bits of coloured glass with a burner or torch and assembling them into attractive compositions, which are then encompassed in a dome of glass. The objects are often stylized, but may be highly realistic.

Sulphide paperweights have an encased cameo-like medallion or portrait plaque made from a special ceramic that is able to reproduce very fine detail. These are known as incrustations, cameo incrustations, or sulphides. They often are produced to commemorate some person or event. From the late 1700s through the end of the 1900s, an amazing variety of glass objects, including paperweights, were made with incrustations. Although still produced today, their heyday was before the classic period.

A fourth technique, a crimp flower, usually a rose, originated in the USA in the first decade of the twentieth century. These weights range from simple folksy items to fine works of art, depending on the maker.

The sort we used to collect are those not made with any of the major techniques but which predominantly include swirls, marbries and crowns. Swirl paperweights have opaque rods of two or three colours radiating like a pinwheel from a central millefiori floret. A similar style, the marbrie, is a paperweight that has several bands of colour close to the surface that descend from the apex in a looping pattern to the bottom of the weight. Crown paperweights have twisted ribbons, alternately coloured and white filigree which radiate from a central millefiori floret at the top, down to converge again at the base. This was first devised in the Saint Louis factory and remains popular today.

We also acquired dump paperweights: those made from end-of-day waste green glass at bottle plants etc., with a pattern blown in and often of elongated shape. Another type is the sort with a picture inside, on the base, magnified by the curve of the enfolding glass. Here I illustrate a rather small one (cost £6) with Buxton Crescent inside – not really a modern paperweight, but inexpensive and with local resonance.

When we first started collecting, we went for anthropomorphic designs, although dealers tended to ask a little more for these. Most are smooth, tactile things, although you can buy cut glass creatures too, although these were less enticing to us. My daughter also liked a very modern variant, the clear glass shape with a lasered design inside. Charity shops seemed to be a good place to find these, often with the original box, at a reasonable price; we picked up one modelled as an Egyptian pyramid with what looked like Wilson, Keppel & Betty inside, for £8.

Long after the event we picked up a London Olympics rectangular weight with the Union Flag and logo inside. These actually came in a variety of colours at some cost, but we paid £8. We also like a pair of engraved glass terrestrial globes and a Swarowski crystal one.

Our best find was quite a large ship’s decanter-shaped one with semi opaque coloured body and clear glass knop. We had to drive a hard bargain with an eastern European dealer to get in down to a tenner, but I had noticed the artist had signed it (although I cannot read the signature!). It is almost certainly Bohemia (Czech) glass.

In case you are curious, the world record price for a paperweight was set at about £221,000 in a 1990 Sotheby’s auction – an antique millefiori weight, produced in the mid-1850s by the French Clichy factory, known as the Basket of Flowers, albeit that the handle had long since broken off and the breaks smoothed off. Heaven knows what it would have fetched with its handle!

Even if you have no pieces of paper to weight down, in case they are caught and lifted by a sudden draught, these are easily collectible items, largely inexpensive and in plentiful supply. Just try not to buy them new, as the value will plummet for the first century or so! You can get really attractive pieces, modern and unsigned for very reasonable money and, as I said to my daughter, who needs a signature if the object is an equal delight without one?

A Passion For Mosaic 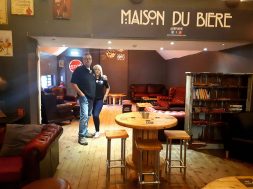