A great friend who is the senior caseworker for the Georgian Group, was asked by the City Council to comment on an application to convert the upper floors of 35, Cornmarket into flats. Our own Conservation Area Advisory committee, which until recently I chaired, had already questioned the applicant’s desire to remove the surviving staircase of a building which is the surviving portion of one of Derby’s greatest lost houses, Devonshire House, 34-36 Corn Market. This was where 18th century Dukes of Devonshire would reside when in Derby to preside over the three annual Race Balls and various civic business – bearing in mind that the Dukes were hereditary patrons of the Borough until 1974.

In his report, in The Georgian, the house was described as ‘said to have been’ the town house of the Dukes of Devonshire. However, there is no doubt about the identification, for although little seems to have come to light at Chatsworth in the archive, other pieces of evidence confirm the identification of a building that was outwardly intact until 1969, when much of it was heedlessly destroyed in favour of an ugly brutalist Littlewood’s store (now Primark).

The origin of the house goes back to the time following the death of Bess of Hardwick, whose last (fourth) husband, George, Talbot, Earl of Shrewsbury, was the builder of a grand house on the north side of the Market Place, which passed to his elder stepson Charles Cavendish, whose son William later rose to become 1st Duke of Newcastle. This house, Newcastle House was demolished to build Derby’s Assembly Rooms and its tale was recounted in Images for July 2014.

The Dukes of Devonshire descend from Charles Cavendish’s younger brother, William, Lord Cavendish of Hardwick and later 1st Earl of Devonshire. A catalogue in Derby Museum asserts that the family town house was built in Corn Market in 1750 and although the catalogue was compiled in the late 19th century, the information was drawn from ‘jottings’ of John Ward FSA which include material dating back to the early 19th century.

Tantalisingly, John Speed’s famous map of Derby, in showing the houses on the east side of Corn Market – then a bustling area funnelled out southwards towards St. Peter’s Bridge where grains were bought and sold from raised basins, set up on posts, called stoops – adds a number 25 just behind the position where we know the 1755 house stood. If you look up No. 25 in the key at the bottom, it says ‘Town House’. Could it be that Lord Cavendish even then had an important residence there?

The house built in 1755 was in fact a re-fronting job, as early plans reveal three burgage plots on the site and later plans reveal a thoroughly irregular plan suggesting that the work was largely a re-fronting of more than one existing building. The resulting brick façade was very impressive, however, and very Palladian. There were three floors plus attics, and the building was nine bays wide. The ground floor was originally rusticated: that is faced in stone with prominent grooving between the blocks, a typically Palladian conceit, and traces of this appeared during demolition in 1969, as the later shop-fronts were being ripped away. The central three bays broke forward slightly under a pediment itself flanked by a stone coped parapet with recessed panels over the bays and originally without doubt embellished with urns. The bracket cornice below was deeply moulded and the windows on the first and second floors had bracketed entablatures over whereas on the central three bays, the middle windows had segmental pediments those flanking triangular ones. The attic windows were embellished with stone rusticated lintels, wavy along the bottom edge. Originally, the maps and plans inform us that there was a central carriage arch leading to a rather constricted courtyard behind, flanked by two non-matching rear extensions.

No record seems to exist of the interior of the house, although there is a passing mention of fine plasterwork, earlier panelling and a fine oak staircase. At Chatsworth a bill survives dated 1777 from William Whitehurst, brother and works manager to John Whitehurst FRS, for a timepiece and case, which an attached voucher identifies as one installed in the kitchens at the Derby house. Probably it was a typical round dial oak cased long case clock, which are very rare as non-striking/chiming timepieces. A very similar one still stands in the almoner’s office at Chatsworth. There were also extensive gardens to the east, stretching to the Morledge and the Markeaton Brook as it swung NE through what is now Osnabruck Square. A stable block and carriage house were attached to close the rear courtyard off.

The builder of this impressive occasional residence was William Cavendish, 3rd Duke of Devonshire who died in 1755. The identity of his architect for the house remains a mystery, for although James Paine was working at Chatsworth for the 4th Duke (from 1756), the façade in The Corn Market shows few of his usual conceits and if the 1750 date is correct, it is too early. William Kent had been employed by the same Duke to completely rebuild the fire-wrecked Devonshire House in Piccadilly, but apart from being severe and equally Palladian, there the resemblance ends.

Personally, I suspect the house was built and the façade designed by the young James Denstone (five years later the architect of Markeaton Hall) perhaps working under his former master, Solomon Browne, but until some hitherto un-discovered payment vouchers appear in the Chatsworth archive, speculation will prevail. The curly lower edge of the attic story lintels, however, reappear on Leaper & Newton’s Bank (not the Thomas Leaper bar) in Iron Gate and once on the fenestration of the Babington Arms, Babington Lane, demolished in the 1920s.

By about 1814, the area in front of the house had become too noisome and insalubrious for the 6th (Bachelor) Duke and, pulling rank as Lord Lieutenant of the County, he thenceforth requisitioned the 1811 Judges’ Lodgings beside the County Hall in St. Mary’s Gate, and the 1750 building was ‘turned into shops [and] the Market Hall was built upon the Garden’ – the pre-1864 Market Hall, that is.

In 1814 the celebrated coaching inn, the King’s Head, was being tenanted by John Hoare, but a change in coaching patterns forced its sale and his redundancy. Co-incidentally, also in that year, the equally celebrated George in Iron Gate closed down, and a former proprietor of that inn – long regarded as the King’s Head’s chief rival – George Woodward, who for a decade had been running the Talbot (also in Iron Gate and to which he had added the name George) – outbid Hoare for the King’s Head. Hoare thereupon moved in high dudgeon across to the recently vacated Devonshire House and founded therein the Hotel and King’s Head, which opened in 1815. Indeed, the two establishments placed side-by-side advertisements on the front page of the local paper on April 13th that year! In late 1822, Woodward (who died in 1844) went bankrupt, having overstretched himself and at a sale held in February the following year, Hoare bought the inn back and restored the name as the King’s Head. Hoare (1760-1834), closing the establishment he had founded in Devonshire House.

From this time, shops proliferated, the most eminent being that of the Moseley family, carvers, gilders and picture dealers. Their premises were embellished by a large giltwood Hanoverian royal arms which survived to be rescued by the Ward family and which was sold following the closure of their shop in Friar Gate in 2000. The result was the total loss of the rusticated ground floor to various shop fronts and of the carriage arch, which was filled in as a shop. Later alterations included new staircases (due to vertical division, including the one the Council insisted on CAAC and Georgian Group advice to save), some plate glass sashes and one entrance now triple arched for a shop window. The gardens which survived were bought by the Strutts to make room for their six-story ‘fireproof’ mill in what is now Osnabrück Square

Horace Ramsden, a Huddersfield-born confectioner, once chef to the Mosleys at Rolleston Hall, Staffs., had founded a restaurant in 1886 at 111 St Peter’s Street, but by 1908 he had also opened in Devonshire House, 35, Cornmarket, under the pediment. It was later run with the Assemblies suppers, by his son Ludlam Ramsden, but was from the 1960s in the proprietorship of Luldam’s elder son Kenneth, jointly with Berni Inns. When the main part of the house was demolished, the restaurant moved along into the northernmost two bays, but eventually closed in 1984. I recall eating there from 1966 and in the newer part from 1971, but can remember no original features except some relevant painted heraldry.  Ramsden’s was replaced by an ephemeral pub named (admittedly at the writer’s suggestion, after the Cavendish crest) the Knotted Snake. This lasted barely three years before becoming an amusement arcade.

But that only accounts for four bays of this once grand ducal town house. The rest, the larger part, was cruelly demolished in 1969. A developer wanted most of the site to build a new Littlewood’s store. At that time all one had to do when demolishing a listed building (Devonshire House was listed grade II) was to inform the Royal Commission on Historic Buildings (England) and, once they had cleared it, go ahead. In the case of Devonshire House, no record appears to have been made, unfortunately.

Indeed in the case of this house, the law changed from 1st January 1969, from which date listed building consent to alter or demolish had to be sought from the local authority, or if listed grade I or II*, from the Secretary of State. This the Littlewoods developer did not want to risk in case it was turned down (as was thought likely), but was not in a position to proceed fully by December 1968. It also appears the applicant had not notified RCHM(E) either, so on December 31st 1968, a few stones were taken off the parapet, enabling the firm to claim exemption from the new procedure, having already technically begun the work under the old system in 1968 – just!

Thus all that remains of the old house is four rather tatty-looking bays nearest the north end of the street. Had the whole façade survived to be restored and cleaned it really would be something to be proud of and an ornament to poor old Corn Market. 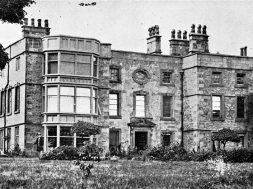 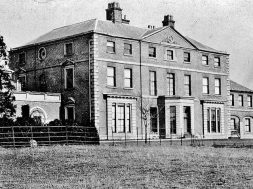 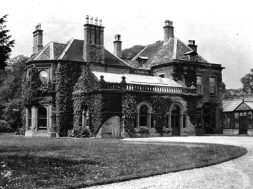