Many people and I am one of them, like to have a short walk somewhere around Christmas, combining it with a special lunch.

This walk is ideal for that purpose, not only is it short, roughly five miles, but conditions underfoot are likely to be reasonably dry for the time of year.  Furthermore, the choice of somewhere to eat is simply one of preference; from The Greyhound in what was once Cromford’s market place, to the ever popular Boat Inn on Scarthin, or the quirky little black and white ‘All Day Breakfast’ café by the traffic lights on the A6; there are even a couple of fish and chip shops, but many walkers prefer the little café beside the canal wharf for its simple but sustaining things like baked potatoes.  The choice is yours alone.

Cromford, the Crom ford, was moved to its present position by Richard Arkwright when he developed his revolutionary cotton spinning system in what grew into the barrack-like mill now slowly being restored by the Arkwright Society.  Along with his mill he built houses for his employees; some of them with a third floor where the male members of the family would operate stocking frames, while their wives, daughters and younger sons laboured in Arkwright’s spinning rooms.  As international interest in his new system grew, he found it necessary to provide accommodation for entrepreneurs who came from all over Europe and beyond.  The Greyhound provided this and so today, the well appointed pub still has a firm link with Arkwright’s part in the Industrial Revolution.

The walk passes the grim fortress-like outer walls of Arkwright’s mill before crossing the busy A6.  A couple of sections of the Wirksworth road are linked briefly with interesting visions of a once busier Cromford.  Above the village a ginnel trodden by lead miners, makes its way to the foot of Black Rock where the High Peak Trail is joined and followed downhill to Cromford Canal; a left turn here follows the tow path back to the car park.

5 miles (8km) of moderate walking on surfaced paths, firm trail and canal tow path, with one climb of 555feet (169m).  One slightly muddy section near a cattle trough prior to entering the woods near Dimons Dale.

Public transport:  TP service from Derby or the 6:1 via Wirksworth.  Cromford station is served by East Midlands’ Derby/Matlock trains.

Refreshments are readily available in and around Cromford village and also at the mill.

• Turn left out of the car park to follow Mill Road, past Arkwright’s Mill as far as the A6.
• Cross the main road at the traffic lights and turn left on to Cromford Hill Road.

Arkwright’s history is writ large on the face of Cromford.  Much of the model village he created is still there for all to see; houses he built for his workforce are now preserved on North Street, as is the Greyhound Inn.  Many of the shops that Alison Uttley later wrote about in Our Village are still there, albeit under different ownership.  The chemist shop where her father bought veterinary medicines is now a restaurant and the blacksmith’s is now a third world artefacts emporium; the quirky black and white café on the A6 was the village barber’s shop in Allison Uttley’s days.

• Cross over opposite the Greyhound and follow the back road along Scarthin, Cromford’s waterside promenade and go past The Boat Inn and Scarthin Bookshop.  If you can tear yourself away from the latter, continue past the pond that once helped power Arkwright’s mill.
• Turn left on reaching the Via Gellia road and follow it back into the market place.
• Cross Cromford Hill road at the pedestrian crossing and turn right, past the shops.
• Turn left down the narrow passageway next to a ladies’ dress shop.
• Follow the ginnel away from the cottages, bearing right past allotment gardens to climb stone steps up to a lane opposite the village school.

Look over the wall to your left as you begin to bear right beyond the dress shop.  This is a complex sluice known locally as the Bear Pit which diverted water draining nearby lead mines, eventually flowing into the system of channels taking water to the mill.

• The school was built originally by the second Richard Arkwright and it stands at the head of North Street where many of their workers lived.
• Pass by the school entrance at the head of North Street and follow the winding ginnel back towards Cromford Hill Road.
• Turn left on reaching the road and then left again as far as Bedehouse Lane.
• A narrow surfaced path begins to climb from the end of the lane.  Cross intervening roads by following signposted paths continuing uphill.
• This path soon meets a farm lane which is followed to where it forks.  Take the right fork and continue uphill towards a stone-built house.
• Turn right beside the entrance gate to the property and go through a little gate to follow a stone wall heading towards the woodland below Black Rocks.
• Go round a perimeter fence surrounding an old spoil heap and bear left to begin climbing wooden steps up to the car park below Black Rocks.
• The fence has been put there to allow semi-alpine plants, many of them lead tolerant, to become established on the old spoil heap in what is called Dimons Dale (Demon’s Dale).
• On reaching the car park, an optional diversion can be made to climb Black Rocks, but return to this point.  Otherwise turn left along the level surfaced track of the High Peak Trail.

The High Peak Trail follows the route of the Cromford and High Peak Railway that climbed by way of steep inclines between Cromford and Peak Forest canals. Horse drawn at first, wagons were hauled up the inclines by cables powered by stationary engines.  You will pass the shell of the engine that once powered Sheep Pasture Incline, just before you leave the level section of the trail.

• Follow the pleasant high level section of the trail, through natural woodland and with extensive views north along Derwent Dale.
• Just after passing the remains of the abandoned winding house, go steeply downhill to High Peak Junction Workshops where the canalside Visitor Centre offers light refreshments.

The Visitor Centre also has a small museum telling the story of this once unique railway and the canal it served.  A short diversion to the left down the canal will bring you to Leawood Pumping Station. The steam driven pump built in 1849 is operated on advertised days and can still lift twenty-four tons of water a minute from the adjacent River Derwent to the canal. William Jessop’s sturdy single arched aqueduct is a few yards further on.

• From the Visitor Centre, cross over the canal by the low swing bridge and turn left along the tow path.  Follow this all the way back to the canal’s end and the possibility of a snack at the wharf, otherwise walk back into Cromford if you want something more substantial.

tags: Walks in Derbyshire Walks in the Peak District
previous Walk around Markeaton
next Walk around Lathkill and Bradford Dales 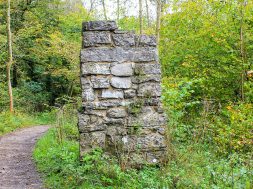