The car park at the Cromford end of its namesake canal is a popular starting point for at least five walks to my reckoning. Most weekends and days in between, well-clad walkers will be congregating, busily pulling on their boots and at the same time, chatting to their friends.

This walk starts, like all the others at the Cromford Wharf car park, before making its way over the river and under the railway, to join a path climbing steeply left up on to Bilberry Knoll.  Almost immediately pleasant woodland tracks lead down to Lea Mills, before joining the long abandoned Lea Mills arm of the Cromford Canal.  Turning right where the arm joins the main canal, the tow-path leads back to the car park by way of the information centre and railway workshops that once serviced trains hauled up and down Sheepwash Incline, on their way across the limestone moors to Whalley Bridge.  You can get a coffee at the information centre, or more filling meals at the canal’s end.

Despite being short in length, this walk is long in interest, especially historical.  Right at the start, the old buildings dotted around the wharf’s car park, once acted as warehouses and offices for the canal company.  The canal itself once linked the growing commercial interests of Arkwright’s Cotton Mills to the outside world, carrying raw cotton in, and finished yarn out.  Alongside this, limestone from nearby quarries was shipped out in horse-drawn barges and coal from Nottinghamshire carried back.  The Cromford Canal drove its way eastwards, passing beneath Ripley through a now abandoned tunnel, before running south at Langley Mill to link with the Trent and Mersey Canal.  Since its abandonment, the Cromford Canal has become a wildlife haven, one of the few places where you might find water voles ‘ratty’ of the Wind in the Willows.  Pleasure trips, some horse drawn, can enjoy a gentle cruise along the water in summer.  However the navigable section ends where it is joined with the remains of the Lea Mills arm.  There is deep, but not dredged water for a mile or two as far as the outskirts of Ambergate, but beyond there will be impossible without major engineering work – the gas depot fills a massive hole cut into the line of the canal.  Furthermore, the Butterley Tunnel became dangerous as far back as the 1920s, cutting off any route beneath Ripley.  What is left of a navigable Cromford Canal remains as a wildlife sanctuary.

The Lea Mills Branch serviced the mill and also a lead smelter owned by Florence Nightingale’s uncle.   When the Derby/Rowsley section of the London/Manchester Railway was built in 1849, it cut through the Lea Mills canal, effectively closing it for evermore.  There used to be a pretty, now ruined cottage at the junction. It probably housed the family of the man who stoked the boiler providing steam to power the massive pump that lifts water from the river, up into the canal in order to keep the level high enough for traffic.  The pump, incidentally operates on advertised days (usually Bank Holidays), throughout the summer.

Much of the history of both the canal and Cromford and High Peak Railway is displayed in a simple, but effective display at the High Peak Junction Information Centre at the foot of Sheepwash Incline.

Even though the first part of the walk is along the road, it is full of interest.  Look out for the Fishing Temple to your right of the bridge.  Beyond and below it are the scant remains of the medieval chapel where pre-bridge travellers prayed before crossing the dangerous Crom Ford.  Look also over the bridge parapet on your left for the  sign briefly telling the story of a horse and rider who jumped into the river from this point.

The entrance to Willersley Castle is to the left beyond the bridge.  This was to be Sir Richard Arkwright’s manorial home, but building was delayed due to a fire and he died before it was finished.

Continuing along the road in the direction of Crich, a narrow footpath leads under the railway and in about 60 yards, an awkwardly narrow stone stile climbs up into fields leading up to the ridge-top track across Billberry Knoll.  On the way it crosses an unsurfaced track leading to two farms on your right.  The first is Meadow Farm and the second is Castletop, one time home of Allison Uttley a famous children’s story writer in the 1920s.  From the top of the hill, the track leads through woodland where bluebells will flower in spring, down to Lea Mills.  Still manufacturing high quality knitwear, it is the last still operating mill in the Derwent Valley.  A dog-leg will take you to the towpath of the abandoned canal.  Follow it, over the railway as far as the main which will lead you back to the car park.

The Walk with Rambler

From the canal-end car park walk out on to the road and turn right.  Cross over the river and go past the entrance to Willersley Castle.

Continue ahead where a side road bears left.  Go forwards to the railway bridge.

After about 50 yards on the far side of the bridge look out for a narrow stone stile on your left.  Climb through it and begin to walk directly up the steep hillside.

Cross a farm track and continue on your way to the top of the hill, passing the boundaries of two stretches of woodland along the way.

Go through a pair of old stone gateposts and then turn right to follow a woodland bridleway, downhill alongside the boundary of more woodland.

In the corner between open fields and the woods, take the furthest left of a pair of footpaths and enter another section of woods.

This is Coumbs Wood, famous along with its neighbour, Bow Wood for its bluebells in spring.  Follow the path, winding downhill.

Where there is a break in the woodland, take the left of two forking paths.  Follow its winding route downhill through Bow Wood until you reach the roadside close by Lea Mills woollen factory.

Turn right along the road, and then cross over towards a group of houses.

Turn left to walk along a path between two of the houses and walk up to the long abandoned Lea Mills canal wharf.

Turn right to follow the footpath along the old tow path.  Notice the swampy remains of the now ‘dry’ canal.

Follow the path, going over a footbridge crossing the Derby/Matlock railway line.  Continue, now beside a water-filled section of the old canal, past the tumbled down remains of the once attractive cottage.  The navigable end of the Cromford Canal is in front.

Turn right along the tow path on your nearside of the footbridge.  Go past Leawood Pumping House.

Continue forwards along the path, past the swing bridge crossing towards High Peak Junction Information Centre. Use the tow path to reach Cromford Wharf about a mile and a quarter away.

4 miles (6.43km) of moderate field and woodland walking followed by level sections beside the Cromford Canal.  One fairly steep climb beyond the railway.

Car Parking: at Cromford Wharf or beside the field leading to the rugby club. 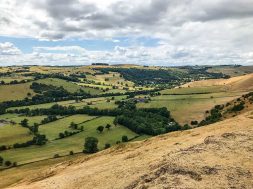 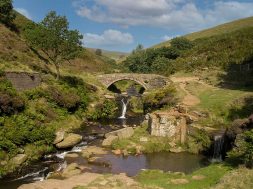 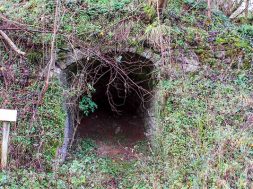 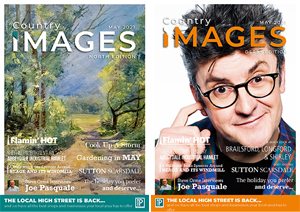